In the course of the DARWIN-DAY 2020, the Biology Center Linz invites to a lecture presented by Elisabeth Haring, Natural History Museum Vienna:

“Strategies of the Slow – Evolution Research on Alpine Land Snails”

EUROMAL triennial series of conferences started in 2000 and since then they have visited 8 different venues all over Europe. The 9th European Congress of Malacological Societies will take place in Prague, Czech Republic, from September 6th  to 10th 2020.

The congress will bring together experienced scientists as well as students and practitioners in malacology and related research fields from across Europe and beyond. The recent and most important findings from the hottest topics will be presented. 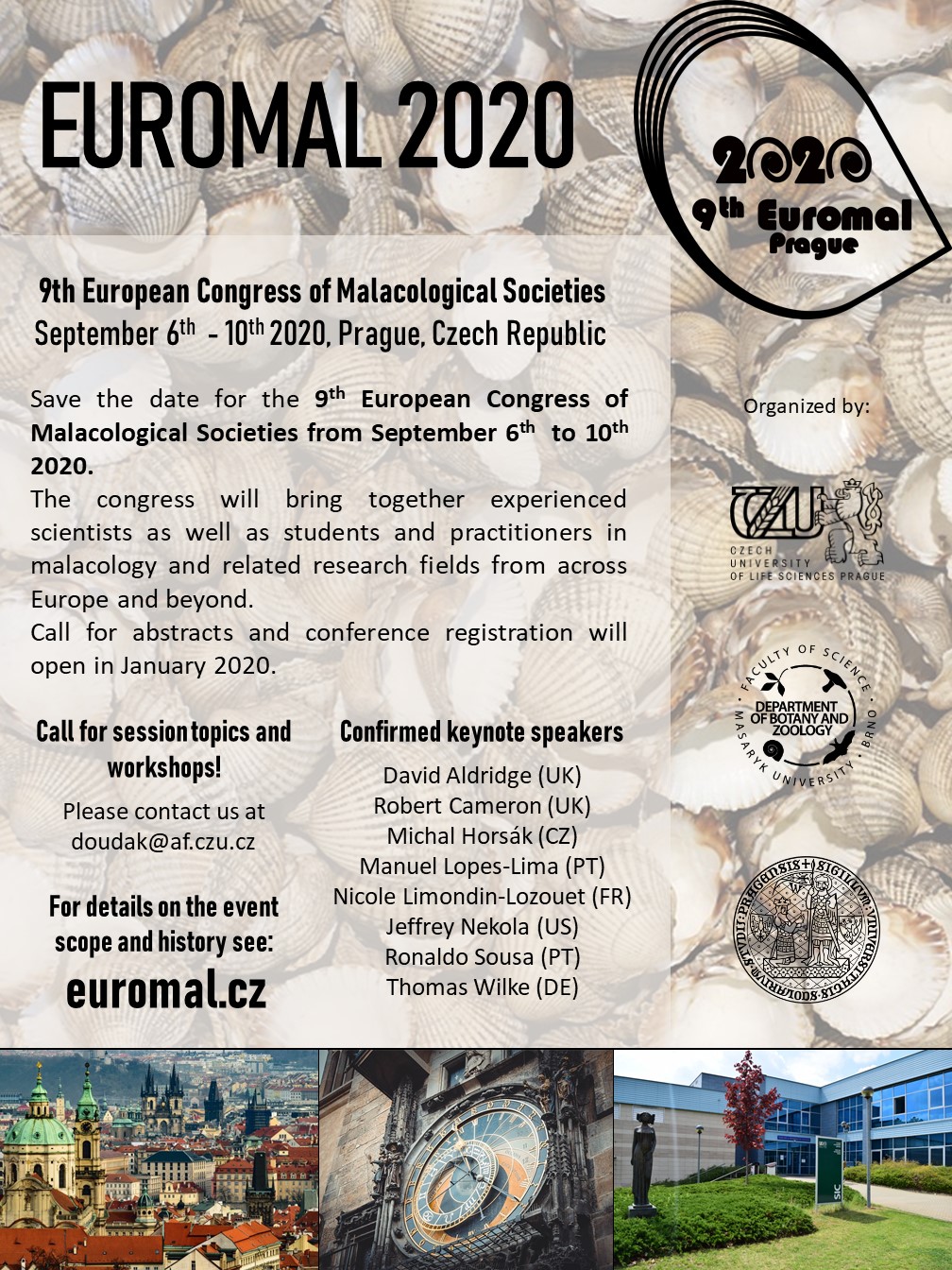 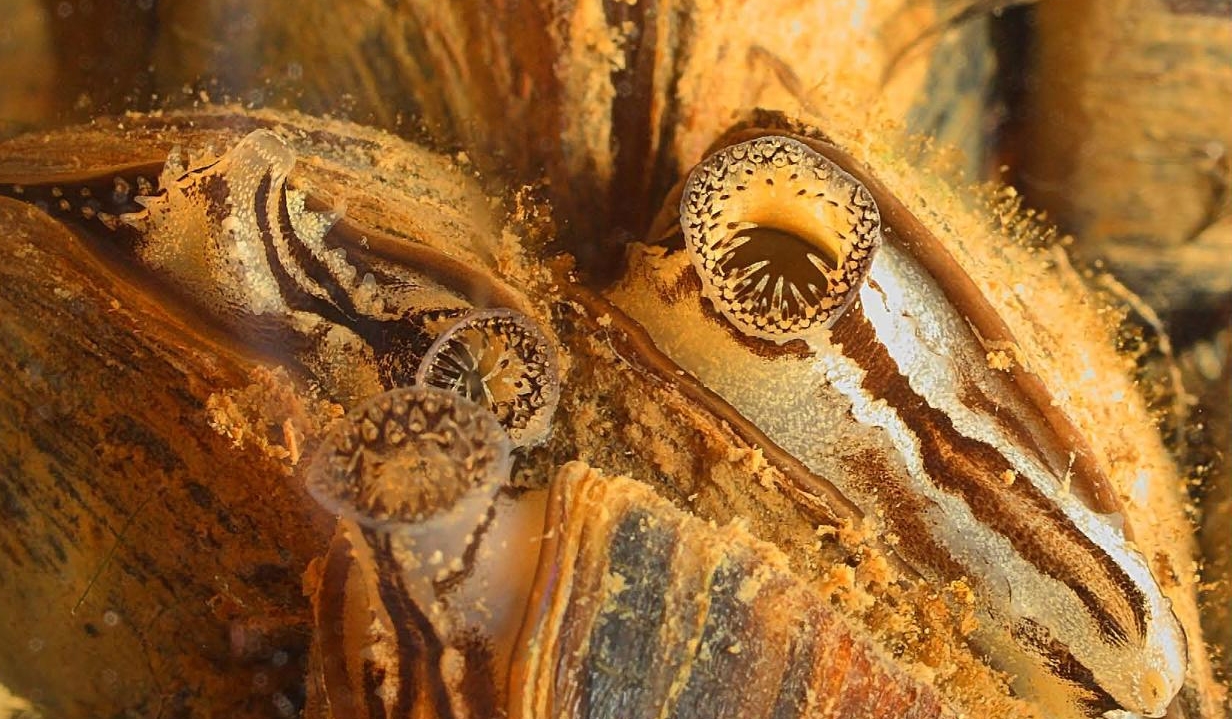 We are pleased to announce that Arianta 7 has been published:

Arianta 7 includes the abstracts from the first MoFA Meeting 2019 in Salzburg, excursion reports and original papers. In this volume, you find also the instructions for authors. We are already looking forward to the next issue of Arianta and we invite all readers to submit their work to our journal (team@molluskenforschung.at).

2:00 pm Guided tour through the mollusc collection in the depository of the Upper Austrian Museum in Linz
Meeting point in front of Lindengasse 7 in 4040 Linz

„Was Sie schon immer über Schnecken wissen wollten – Österreichs Schneckenexperten geben Einblicke und Auskunft“ (in German), see also our blog post
Representatives of MoFA will provide information on molluscs and on research on molluscs in Austria and will (be available to) answer questions in a discussion with the audience. A new database for the determination of European molluscs will be presented.
Participation is free.
Registrations until 4th October under team@molluskenforschung.at
For exact directions or further questions please contact team@molluskenforschung.at

In the course of the accompanying programme of the exhibition “Stretch out your feelers!” – Snails in all their glory (17. 05.2019 – 01. 03.2020 at Biology Centre Linz) there will be several mollusk-related activities, some oft them also interesting for children. Please have a look at the six-month programme of the Biology Centre.

Specifically we would like to mention the MoFA presentation

„Was Sie schon immer über Schnecken wissen wollten – Österreichs Schneckenexperten geben Einblicke und Auskunft“ on Friday, 11 October, 18:00, Biology Centre Linz (in German)
Representatives of MoFA will provide information on mollusks, mollusk research in Austria and will be available to answer questions in a discussion with the audience. 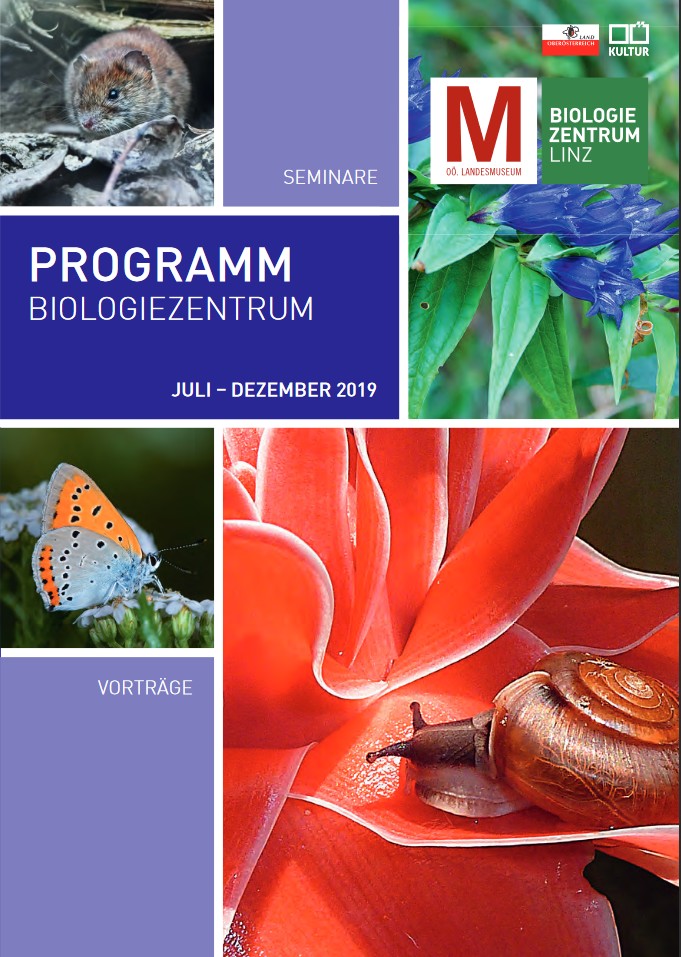 From the six-month programme of the Biology Centre Linz, July-December 2019, page 20 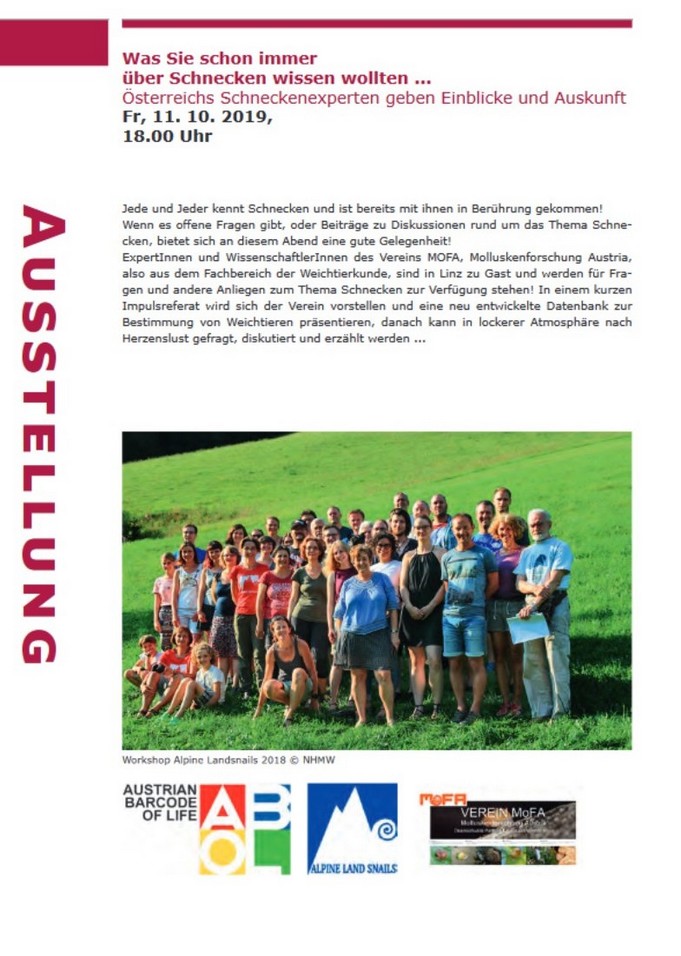 The presentation of the MoFA Junior Awards to participants of the first MoFA conference was one of the highlights of the meeting. The award was given for the best talk and the best poster by participants in early career stages. We thank all applicants for their interesting and excellent contributions. Only two candidates could win, whom we want to present again here: 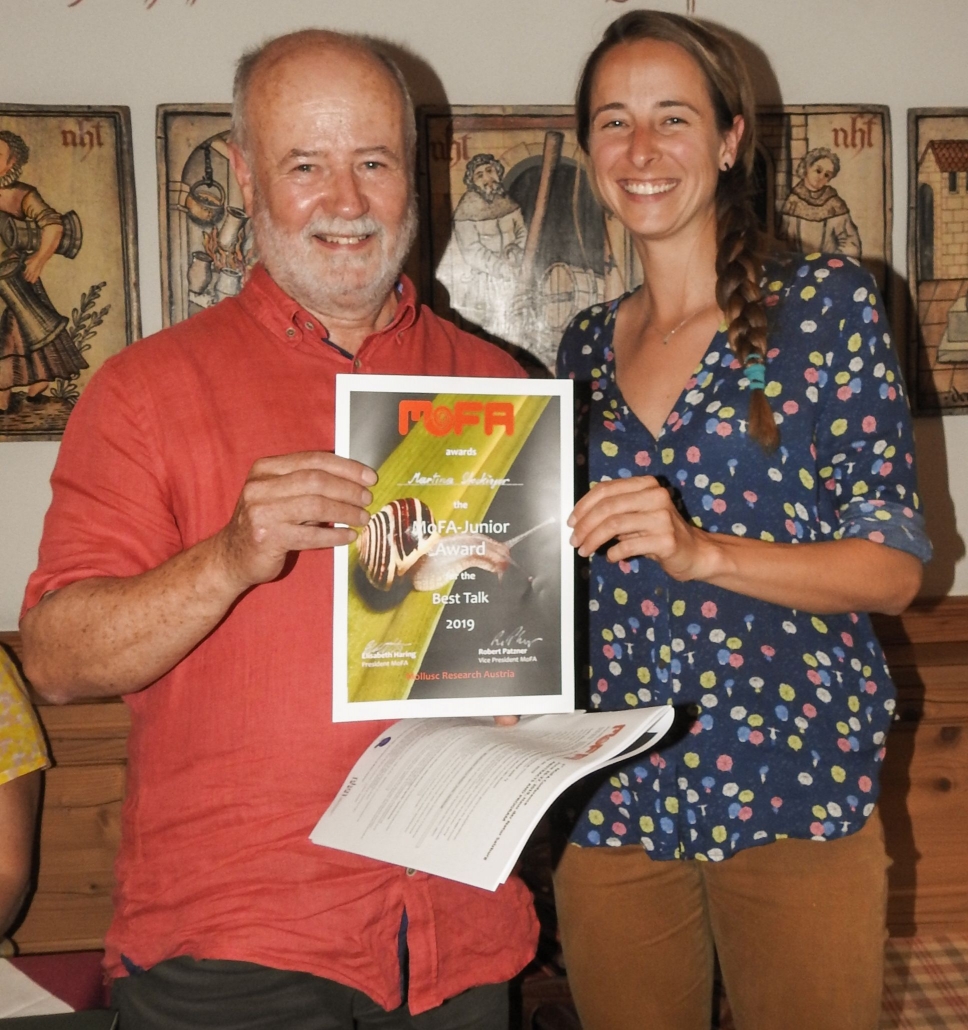 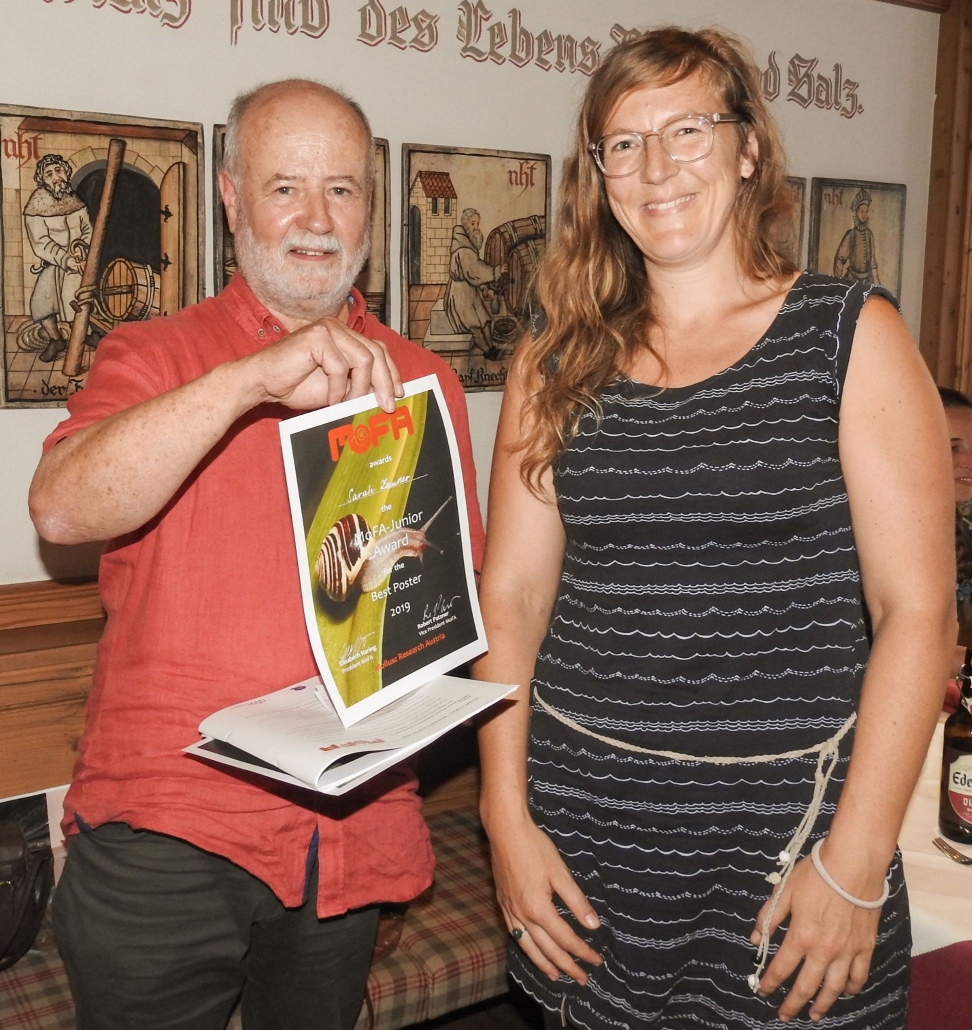 The poster prize for the contribution “Molecular characterization of gelatinous egg masses in the lucinid Loripes orbiculatus argues for an acquisition of bacterial symbionts from the environment” was given to Sarah Zauner (University of Vienna), who deals with the moon’s clam and its symbiotic sulfur bacteria.

On 26th and 27th of June we held the first conference of the young society Mollusc Research Austria (MoFA) in Salzburg. The first day was devoted to scientific lectures and posters as well as the awarding of Junior Awards. All contributions were exciting and well presented and the day offered broad thematic diversity. The group of almost 50 participants was quite multinational, with representatives from Poland, Germany, Georgia, Slovenia and Austria. In the venue “House of Nature” we were warmly welcomed and their team took good care of us. In the evening, the winners of the Junior Awards, which had been selected by an independent four-person jury, were honoured.

Martina Stockinger from the University of Vienna won the MoFA award for the best talk for her contribution on the mollusc fauna of a seagrass meadow in southern Crete (Presence and prevalence of non-indigenous molluscs in a Posidonia oceanica meadow in southern Crete). The poster award went to Sarah Zauner for the question of how a moon’s clam comes to its symbiont sulfur bacteria (Molecular characterization of gelatinous egg masses in the lucinid Loripes orbiculatus argues for an acquisition of bacterial symbionts from the environment).

On the second day our colleagues from Salzburg took us to the beautiful headwaters around Fürstenbrunn and to the floodplains of Glanbach near Grödig, where we also documented the mollusk species found there. Overall, we had two inspiring, interesting and atmospheric days in the beautiful country of Salzburg. We would like to thank all participants and especially the speakers who gave the conference substance, the chairman of the sessions, the members of the jury and of course all those who helped organize this nice and successful conference, especially of course the colleagues in Salzburg.

With pleasure we send out the final program for the MoFA conference, which will take place on 26th – 27th June 2019 in Salzburg. The program is very diverse and we are happy to meet the participants next week and are looking forward to an interesting and stimulating meeting. We hope those who cannot attend this time will be able to attend the next MoFA conference.

Just before the middle of the year, the new newsletter of the Malakologische Arbeitsgemeinschaft Salzburg has been completed.

Bobby Patzner and his team hope you enjoy reading and wish you a nice – and successful – summer!

For the exhibition “Streck die Fühler aus”, which will open next week at the Biologiezentrum in Linz, the accompanying brochure is already available online. Members of MoFA, together with the colleagues in Linz, contributed significantly to the brochure in image and text. We are pleased that the cooperation was so constructive and that this beautiful publication was realized.

All images and materials are copyright protected.
Scroll to top